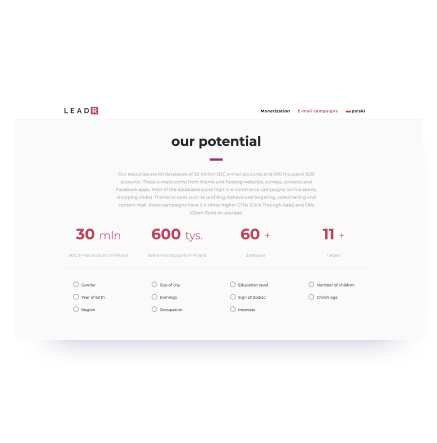 LeadR leverage several services to run cold email outreach campaigns, while they also collect their prospecting data from multiple sources. Given the numerous customer databases, the company uses to store information, alongside stringent EU regulation requiring a declaration to each customer in the footer of an email of where the company sourced the personal information – and you have a headache.

LeadR was running upwards of one-hundred campaigns per day directed at multiple different customer groups, which presented its own difficulties within the above context. But with the additional overhead of custom footers required per customer group; the complexity grew exponentially, as did time needed to set up a campaign.

Redvike’s task was to find a solution…

LeadR has upwards of 100 databases storing client information, which itself has come from disparate online sources.
They also use multiple email services to contact different customer groups when running email outreach campaigns.
With EU regulation requiring LeadR to confirm where it obtained personal information in the footer of any email sent, the complexity of delivering email campaigns became almost too great as no campaign could run off a single template.
At their current campaign volumes, the company was running out of ideas as to how to manage the process efficiently.

Redvike stepped in to rationalize the end-to-end process, streamlining data collection, processing, storage and, ultimately, use of personal information. Redvike developed an API allowing LeadR to send a single email template to the service – without a footer – detailing the target database to which the email should be sent. The subsequent footer is then added to the main template depending on the specified database – with campaigns generated automatically courtesy of the API.

Redvike created an API to streamline the entire campaign management process – from data collection through to sending emails.
The process of adding custom footers is now automated depending on the customer database specified per campaign.

The custom API has turned LeadR’s business around thanks to the productivity gains. The campaign creation process is unrecognizably simple with a single resource able to manage what previously took dozens. The business has completely reorganized itself and runs ‘000’s of campaigns per day, while the human risk-factor of incorrect templates or footers has all but vanished.

LeadR now runs ‘000’s of daily campaigns - as opposed to a few hundred - with zero-risk of human error.
Interested? - let us know ☕
[email protected] Get Estimation